PLEASE CONSIDER MAKING A DONATION TO SUPPORT THE P.R.T. NEWSCENTER

William Alden died November 16 in Falmouth, Massacusetts. He was 92. Mr. Alden was married to Judith Alden for 67 years, was a descendant of the English colonist John Alden, served in the Navy, and graduated from Harvard. He created or served on the boards of a number of businesses and charities.

More after the jump »
Posted by Mr_Grant at 5:20 PM No comments:

Long time pod transit company Taxi 2000 closed in mid-2017, exiting the business without achieving a demonstration facility or system in fare service. A shareholder letter obtained in January by the NewsCenter revealed that in 2016 Taxi 2000 lost an angel investor who held 49% of the company's shares. 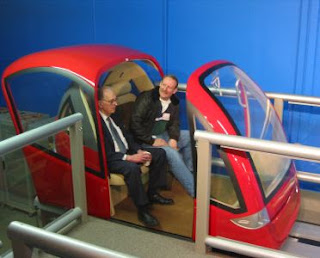 Part V of the IPERT Series

Email chatter picked up recently concerning Freely and Workman, therefore we thought it was time to check up on the Dotard Duo's internet presence.

Most of it is the same old stuff–except for this listing at MuseumsUSA, which lists "Roger Freely, Curator" at the Western Museum of Flight at 12016 Prairie Avenue in Hawthorne, CA.

It likely won't surprise you to learn that is not the address of the Western Museum of Flight.

Part IV of the IPERT Series

The NewsCenter is able to confirm key parts of allegations made, first tipped by a comment on Part III , against IPERT fraudster Roger D. Freely. Not left out of the story is his partner Ivan L. Workman. The March 12, 2017 comment was—


Roger Freely tried to get a 16 year old child to move in with him. He also has a Facebook account. According to Facebook rules and regulations sex offenders cannot have accounts. However Facebook does not provide a way to report him.

Tweets about "eco OR urban OR transit from:wiselineprt"

TWIP looks at the world of sustainability beyond the field of PRT/podcar technologies. Here you'll find our interest in the environment (especially Puget Sound protection & restoration), green consumerism, city planning, and clean energy. TWIP is also where we take our views on near-term transit planning for a ride on Urban Streetcars.